Huge work on the inspection of the state of the basic parts of the hydraulic press with a force of 3150 tons, in connection with the overhaul. Due to the continuous operation of this press, almost half of the parts are not suitable for further use. Drawing up a defective sheet significantly helped to assess the scale of future repairs.

The team conducted a mechanical press survey using non-destructive testing methods. Due to extensive experience with similar installations. In a few minutes, the reasons for the inoperability of the unit were found, which can not be detected with the armed eye.

In the Christmas and New Year holidays worked strenuously and conducted a difficult milling of guides with geodetic support. 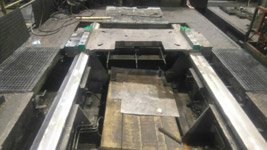 For Siempelkamp press with the force of 200 MN our specialists carried out a flaw detection:
- Architrave Press Corps
- movable press beam
- Press foundations
- threaded sections of the press columns. 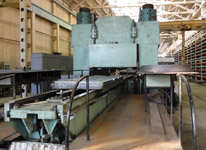 1. Inspection of the hammer shoe by methods of nondestructive testing in places accessible to control was carried out. As a result of the survey, two cracks with a total length of 590 mm and a depth of up to 160 mm were found on the horizontal surface of the cushion installation site.
2. Recommendations for rebuilding the shabot were developed. Using the proposed repair technology will eliminate cracks and get in the places of their formation a high-quality metal with high strength and mechanical characteristics. Performing repair work on the described technology in conjunction with periodic inspections will ensure a long trouble-free operation of the shabot.

The inspection of the cover of the loading crusher by non-destructive testing methods was carried out. The dimensions and location of internal defects such as cracks are determined. 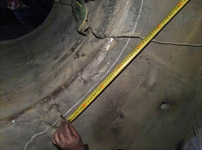 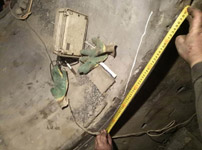 1. The construction of the three-dimensional geometric model of the frame is performed and the calculations of its stressed state by the finite element method are carried out. The results show that the existing frame structure does not provide a sufficient margin for fatigue strength. In the case of continuous operation of the stand of the stand when working on a design effort, the process of nucleation and further spread of fatigue cracks is inevitable.
2. The experimental determination of the operating stresses in the stands of stands No. 6,7 was performed by the method of electrotensometry. After analysis and Thus, the constructed mathematical models adequately describe the stress state of the struts and can be used in the future to optimize the design.
3. The inspection of the stands of stands No. 6,7 with the methods of nondestructive testing was carried out.
4. The mechanical properties of the metal of the stands of stands No. 6, 7 were estimated by the method of hardness.
5. The influence of the shape (radius) of the gantry transition in the zone of installation of the screw of the pressure screw on the stress state of the bed by the finite element method was studied.

The examination was carried out using methods of nondestructive testing of the right and left bed.
The control of accessible foundation bolts of tiles and studs of fastening of stands to plitovinam is carried out.
As a result of the control of the studs fixing the frame to the slabs found:
-2 cracks in the hairpin
-latitudinal crack in bolt.
On the supporting surfaces, under the pressure nut of both beds, the gradation was detected, as well as defects such as scuffing and small shells.

Urgent inspection of the pressing beam of prospect No. 120 for the development of cracks by methods of nondestructive testing in places accessible for control was carried out. An assessment of the stress state and the determination of the causes of the cracks have also been made. 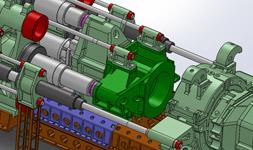 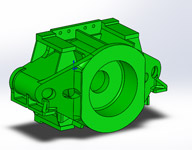 -A survey of architrave and movable traverses using methods of nondestructive testing in places accessible for control was conducted. As a result of the survey, a number of cracks emerging from the technological holes in the vertical walls of the part were found. Thus, at present the mobile traverse of the press is in an emergency condition. Further operation of the movable traverse can at any time lead to its destruction. It was recommended to immediately develop and implement the technology of repair repair of the movable traverse.
-Investigation of the base by methods of nondestructive testing. As a result of the survey, a number of cracks with a length of 200 mm were found.
- Ultrasonic flaw detection of threaded parts of press columns and tie rods of the base was performed.
-The control of uniformity of loading of columns of a press by a method of electrotensometry is carried out.
-A revision of hydraulics and automation systems was carried out, the scope of work necessary for their modernization and repair was determined.

Our experts carried out an examination of the actual state of the basic details of a horizontal press with a force of 35 MN firm
1. Flaw detection of threaded sections of columns of presses and power screeds of the press architrave with a force of 10,000 tons was performed.
2. Inspection of the cross-members of lifting and counterbalancing cylinders of presses by methods of nondestructive testing was carried out.
3. Examination of tides on movable traverses for fixing rods of lifting and counterbalancing cylinders by methods of nondestructive testing was performed.

STRENG s.r.o. has executed piece of work for SIGMA s.r.o. regarding new powerhouse construction at ČEZ a.s. in Ledwize town.

The mounting seats had changed for 1.6 mm during the frame fixing while putting the pump.  This induced the extream vibration of the working pump. We have machined the surface of the ground with the help of mobile milling machine and renew normal operation. 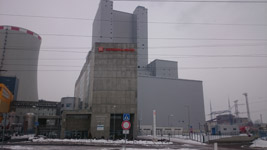 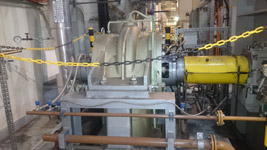 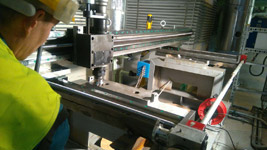 Due to defective thermal tightening of pillars the contact surfaces of pillars screws got badly worn out after long operation. With the help of special trimming machine we have repaired the worn out surfaces. To reduce time and costs the we have not invocated the dismantling of columns. 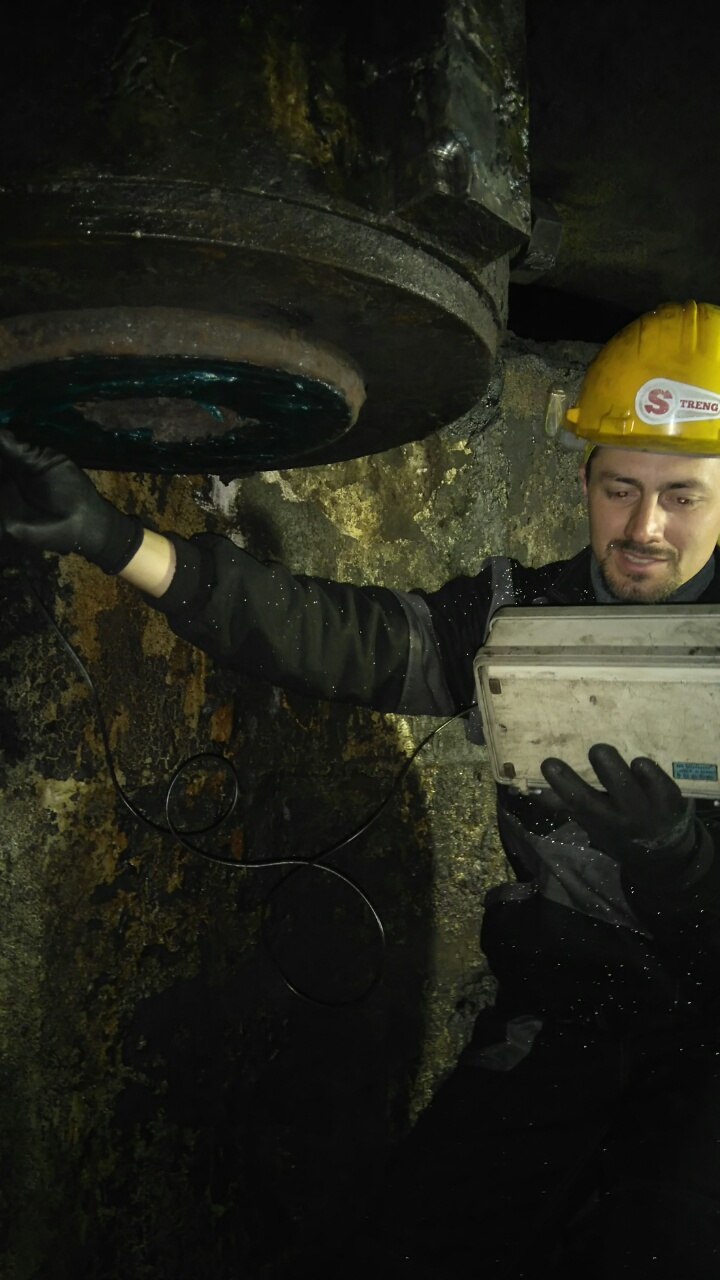 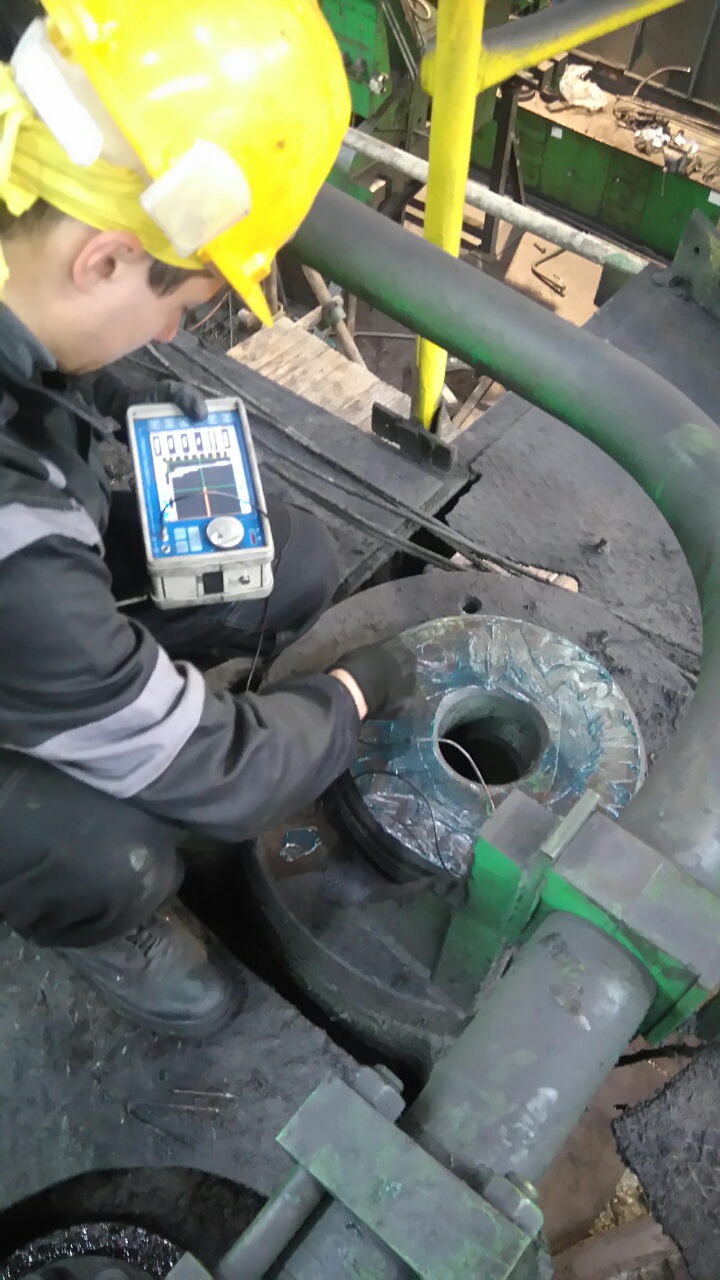 During the scheduled capital repair at BONATRANS GROUP a.s. we have expertised the forming press base details. The method is non-destructive testing.

We have bored the hole for the bar in the turbine of the hydraulic plant with the help of electrically powered YORK 4-14ET machine. The matter is that we could hardly weld the machine to cast-iron turbine. So we used the special toolheads and bolted the machine up.

During the scheduled capital repair at BONATRANS GROUP a.s. we have made new thread holes on the press 8MN. The work was done with the help of the mobile hydraulically powered thread-tapping machine.

We have machined new holes on the riser blocks of ZDAS presses CYAB 1000 and CYAB 1200 models. The work is executed in-place with the help of portable equipment without dismantling of riser blocks. The marking for the holes was executed with the high-precision survey equipment.